Mar 07, 2018 —NORWALK, Conn. —  The Board of Directors (the “Board”) of Xerox (NYSE: XRX) today issued the following letter to Xerox shareholders, reinforcing its belief in the significant benefits of the Company’s proposed combination with Fuji Xerox:

On January 31, 2018, Xerox announced its plans to combine with Fuji Xerox – the joint venture Xerox and Fujifilm established in Asia 56 years ago – to create a global leader in innovative print technologies and intelligent work solutions.

As a result of a comprehensive review of the Company’s strategic and financial alternatives, Xerox’s Board and management strongly believe that the combination with Fuji Xerox is the best path forward to create value for Xerox and its shareholders:

Our partner in the Fuji Xerox joint venture, Fujifilm, will own the other 50.1 percent of the combined company. Fujifilm will also consolidate the same share of the debt associated with the special dividend paid to Xerox shareholders at closing, but will not receive any portion of this payment.

The relative ownership of the combined company is favorable to current Xerox shareholders and implies an over 15 percent premium relative to Xerox’s unaffected stock price of $30.35, which was prior to media reports about a potential transaction on January 10, 20182.

In addition, Xerox and Fujifilm teams have already identified $1.25 billion in annual cost savings opportunities from combining the two companies, demonstrating the highly synergistic attributes of this Transaction.

As shown in the chart below, this compelling shareholder value equation represents an illustrative total value of approximately $45 per share for the combined company.

Importantly, this does not reflect the value creation or multiple expansion opportunity over time that we believe should result from the combined company’s enhanced revenue profile, global reach, scale and greater competitiveness.

Shareholders Will Be Owners of a Larger, Stronger and More Valuable Company
The Transaction will create an industry leader with $18 billion in revenue that is better positioned to compete and capture growth opportunities in the marketplace by leveraging the global reach, scale, technology and innovation strengths of the two companies. With direct access to high-growth markets in Asia Pacific, Xerox will operate as a truly global platform for the first time in its history.

Specifically, the revenue and cost synergies identified through this combination include:

In addition to the $1.25 billion of cost synergies related to these actions, there is a separate cost reduction program already underway at the existing Fuji Xerox joint venture, which is expected to deliver $450 million in annual cost savings over the next two years. This brings the total annual cost savings target for the combined company to over $1.7 billion to be completed by 2022, with approximately $1.2 billion achievable by 2020:

By capitalizing on these opportunities, the combined company is expected to return to revenue growth by 2020, faster than Xerox could achieve on its own, and deliver industry-leading operating margins in the high teens by 2022.

As a result, the combined company’s operating leverage is projected to drive free cash flow in excess of $2.0 billion. This will enable us to support investments in innovation, strategic growth initiatives and attractive capital returns over time.

While Xerox has been successfully executing its strategy to improve its revenue trajectory and expand margins, we believe the future value potential of the combined company, driven by the substantial revenue and cost synergy opportunities, exceeds what would be achieved as a standalone company.

The synergies from bringing together two highly complementary businesses will be a leap forward on our path to become the industry leader and enhance shareholder value.

The proxy statement we will file in due course will include additional disclosures regarding the financial profile of the combined company, which we believe will reinforce the compelling value of this Transaction.

Xerox and Fujifilm Are Already Closely Aligned, and Both Have Demonstrated Track Records of Success in Transformation
Our longstanding relationships with Fujifilm and Fuji Xerox provide this combination with greater execution certainty than most M&A transactions. The companies have a long history of working together and know each other well. The combined company will have an experienced leadership team, led by Xerox’s CEO Jeff Jacobson, entirely committed to realizing the full value potential of the new company.

As evidenced by the proven track record of decisive actions at both Xerox and Fujifilm, the combined company will also build on a strong legacy of significant recent transformations at both companies: 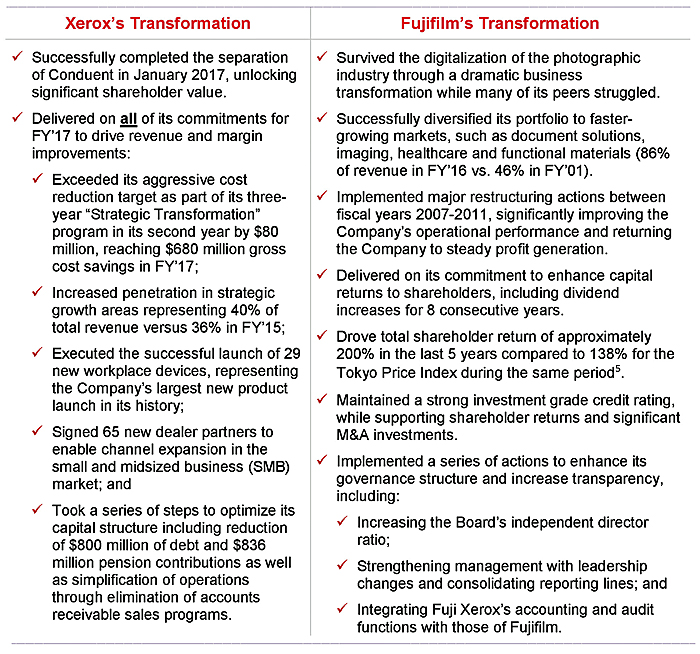 The Transaction Agreement Establishes Strong Governance and Ownership Safeguards for Current Xerox Shareholders
Strong governance protections for current Xerox shareholders have been built into this Transaction, including:

Existing Fuji Xerox Joint Venture Has Been Integral to Xerox’s Competitiveness, and the Combination Will Optimize the Benefits to Xerox
For 56 years, Fujifilm and Xerox have jointly owned and operated the Fuji Xerox joint venture. This partnership is among the most successful cross-border collaborations between the U.S. and Japan, and has existed in its current form (25% owned by Xerox, 75% owned by Fujifilm) since 2001. Xerox has significantly benefited from this relationship over the years.

Today, Xerox sources more than two-thirds of its equipment products from Fuji Xerox, including the vast majority of the office equipment sold to enterprise customers. Fuji Xerox designs and manufactures this equipment using the shared IP that the two companies have developed together over the decades.

It is important to note that Xerox, in its sole discretion, determines the volume of business it conducts with Fuji Xerox and is not subject to any minimum purchase obligations under the existing supply agreement. In fact, Xerox at times solicits other proposals to determine which supplier best meets the Company’s requirements in terms of cost, quality and pricing. Based on this ongoing sourcing analysis, we believe it is highly unlikely that Xerox would be able to achieve attractive pricing and terms with alternative suppliers.

Xerox benefits from Fuji Xerox’s superior technology, design and manufacturing expertise, as well as attractive pricing. As a result, our supply relationship with Fuji Xerox has grown and been sustained at mutually-beneficial economics over time.

Xerox’s strategy for bringing innovative, high-quality products to the market – in partnership with Fuji Xerox and other suppliers – has clearly been successful, as evidenced by our #1 equipment revenue market share and industry-leading margins.

The proposed Transaction will also solve for suboptimal aspects of the current joint venture structure by enabling Xerox to:

Combining Xerox with Fuji Xerox builds upon this strong partnership to create a global platform with enhanced scale, competitive positioning and financial flexibility. The combination presents tangible, achievable opportunities for value creation both in the near and long term.

We will provide more information about our partnership with Fujifilm and the Fuji Xerox joint venture in further communications with our shareholders.

The Combination Is the Best Path Forward for Xerox
Xerox’s Board of Directors, in consultation with world-class financial and legal advisors, explored all strategic and financial options reasonably available to improve the Company’s growth trajectory, better compete in a challenging industry environment, and ultimately create shareholder value. This included options for its standalone business, capital allocation strategy and the current Fuji Xerox joint venture construct, as well as other potential strategic transactions.

Upon thorough evaluation over many months, the Board concluded that the proposed combination with Fuji Xerox is superior to other alternatives and in the best interest of all Xerox shareholders because:

Xerox’s Board of Directors is focused on creating long-term value for the Company and its shareholders. Our Board members are confident in the many benefits of the combination and the bright future Xerox will have as a result.

Thank you for your continued support and investment in Xerox.