Three months and two national dealer meetings into 2015 and it’s clear that one of the greatest trends taking place in the MFP industry has almost nothing to do with imaging equipment or the printed page. Like never before, MFP manufacturers and dealers are investing in Managed IT Services, with the goals of differentiating their offerings, diversifying their revenue sources, and building a bridge to the less-print future.

Overall, this is good news. I completely agree with the strategic benefit of controlling the client’s network and certainly believe that manufacturers and dealers need to add new revenue streams as MFP units and clicks decline and margins shrink. That said, it’s still amazing to see such a large portion of a unique industry add the same completely new business model and service offering, almost in unison, with such a mixed understanding of why now is the time to get into Managed IT Services or what the payoff will be once they’re in.

Quantifying The Managed IT Service Synergy

It can be hard to quantify the synergies between the MFP business and Managed IT Services, and often times the synergistic benefits depend on who you talk to. I’ve worked with IT-centric VARs who view selling MFPs or MPS into their current Managed IT Service clients as the easiest sale they make. Meanwhile, other dealers continue to view MFPs/MPS and Managed IT Services as VERY different businesses, lamenting their conflicting models, skill sets, talk tracks, and sales cycles. Sounds a lot like dealers’ complaints about MPS a few years ago, right? Considering that “Services-Led” Xerox just sold off its IT Outsourcing business and HP is in the process of separating its IT and Print divisions into two different companies, there is strong evidence that meaningful MFP/MPS and IT Service synergies can be difficult to achieve, at least at the enterprise level.

Like I said, it depends on who you talk to, but for many organizations, going to market with both IT Services and MFPs/MPS has yielded 1+1=2 results, maybe 1+1=2.5 results if done exceptionally well. Of course both of those equations look pretty good when viewed from a declining market, but they don’t exactly scream synergy, and just remember that’s the top-line math.

You don’t have to be Simon Sinek or Steve Jobs to know that good businesses and successful initiatives start with a clear understanding of WHY you are doing what you’re doing. In fact, at this point “start with why” is about as overused in business as “synergy,” so if you like business buzzwords, this is the blog for you! And if you don’t, you’re probably not in the print industry anyway… There are a lot of motivations to expand into Managed IT Services, but I believe that there are many MFP manufacturers and dealers who would benefit from clarifying their own ‘why’and confirming that they are in or entering the Managed IT Services business for the right reasons.

We’re all printer and copier guys. I know I am anyway. We tell stories about how the print industry found us or how we found the industry, and how ever since then we’ve had “toner in our veins.” It’s been said thousands of times by thousands of people in hundreds of ways, and for most of us it’s hard to not draw a straight line from any new initiative back to selling more MFPs and generating more clicks.

When it comes to Managed IT Services, this printer/copier guy believes that the line you draw from IT Services back to your MFP/MPS business should be a dotted one, at most.

If you decide to get into IT Services to diversify your revenue sources and expand your business beyond print, those are fine motivations, but once you’re in, your ‘why’ better quickly shift to something along the lines of being the best damn IT Service provider in your area. This goes for the folks at the worldwide manufacturer headquarters too, who clearly want their services investments to drive demand for the MFPs and cartridges coming out of their factories, but from a long-term perspective should be doing everything they can to allow their sales subsidiaries to aggressively seek this type of strategic diversification.

The Fallacy of Managed IT Diversification

Believe it or not, offering both MFPs and Managed IT Services does not make you all that different. On the channel side, IT-centric vendors like HP and Xerox have generated a huge portion of their indirect sales through VARs for decades, while hundreds of BTA dealers now operate Managed IT Services divisions (including many of the largest dealers). On the manufacturer side, both Ricoh and Konica Minolta have integrated Managed IT Services into their direct operations and channel outsourcing portfolios, and rumors suggest that Canon’s Managed IT Service channel program is coming…

That is at least a third of the US B2B print industry with some sort of Managed IT Service offering, suggesting that although these vendors and dealers enjoy a differentiation advantage against those who have not (yet) expanded into IT Services, offering both MFPs and IT Services is not as unique as some believe. Remember What You Learned from MPS

Everyone remembers MPS right? It started out as the industry’s greatest new opportunity, made some folks in the industry a bit of money and customers even more, but is losing its buzz now that everyone has pretty much figured out what MPS is and what it isn’t. Right, that MPS. One big lesson is that services that base their value proposition around maintaining IT infrastructure do not drive big or immediate increases in hardware sales (especially unrelated hardware). That was one of the tougher MPS lessons and I still have vendors asking me when dealers will swap the high-margin LaserJets in their MPS installed base for a single-brand fleet of …Lexmark, Ricoh, Canon, etc. When you look back at the channel’s top MPS providers, they succeeded largely due to the absence of ulterior motives beyond customer cost savings and their own margins. The best MPS guys would not dream of selling-in an MFP if the customer did not absolutely need it, and the same is going to be true for the best Managed IT Service guys.

The second lesson comes from the role and value proposition of contract SKUs. Although not right for everyone, we’ve seen Xerox achieve an impressive level of adoption for its continuum of channel MPS programs, which function much like the IT Service contract SKUs offered through All Covered and Ricoh CHAMPS, and provide valuable lessons on how IT contract SKUs can be successful in the dealer channel. First and foremost, with these IT Service contract SKUs, the dealers have to trust that their provider won’t steal or mess-up their accounts, and wholesale pricing can’t be so high that it’s insulting to dealers with any IT industry context. Beyond those basics, the greatest lesson may come from how PagePack and XPPS were used. Sure, Xerox was able to get some VARs with no print business to sell MPS because of these programs, but Xerox had the greatest success positioning these programs as an arrow to add to their partners’ MPS quiver, which does not have to fit all situations, but is useful for some. It’s not that easy if these IT Service SKUs are being offered to dealers with no IT business, but if you can find a way to help dealers build their own Managed IT Service practice, not just serve as a channel, it’s more likely that they will leverage your contract SKUs the way Print VARs use PagePack and XPPS.

Do it the Right Way

For a long time, the MFP gods have been very good to dealers. The revenue gods brought hardware sales, the profit gods brought ongoing clicks, and there has been a lot to be thankful for. However, with hardware units, clicks, and margins threatened, dealers are going to have to decide to either grow their traditional revenue streams just to maintain the same level of profitability that they were accustomed to or seek out new ways to generate recurring revenue and profit. For dealers interested in option number two, Managed IT Services is as good as any “new”service or product to expand to, and hopefully those that do make this leap or have already done so, do it the right way, because they’ll face plenty of competition. Jake Fishman is business director for gap intelligence, a San Diego-based independent technology research firm with emphasis in helping product manufacturers and resellers understand current market trends in order to respond to customer demands as they occur. He can be reached at jfishman@gapintelligence.com. 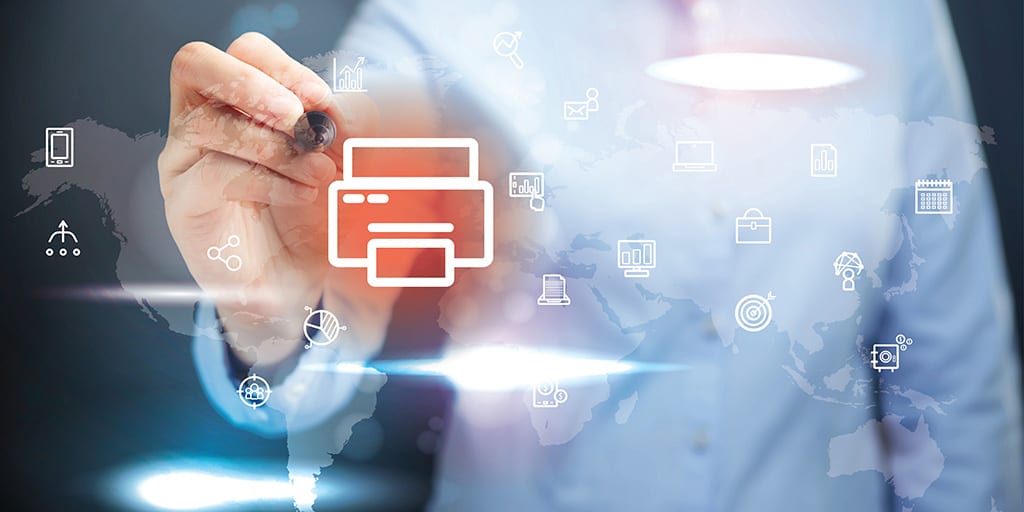 Your Beliefs May Be Holding You Back

MPS – Out of Vogue or Making a Comeback?

The Golden Era of Innovation in Document Outsourcing