On Feb. 3, Sharp released its financial results for the third quarter of its fiscal year 2019. Despite a continued challenging business environment, including prolonged U.S.-China trade frictions, Sharp reported steady profits for the quarter. Profit margin continued to grow while operating profit exceeded 4.5% for the first time in six quarters.

The 8K Ecosystem segment, which includes MFPs, saw a decline in sales and profits. This division also includes panels for smartphones, TVs and panels for automobiles, and Sharp did not break out the MFP segment.

The ICT segment, which includes the Dynabook products and IoT business, reported 13.7% growth year over year for the first nine months of FY2019.

Sharp projects a recovering trend from a low in the fourth quarter of FY2018, and projects Q42019 to outperform Q3 in both sales and profits. Sharp has revised its full-year forecast for net sales downward, although it still projects an increase from the previous year, while leaving the profit forecast the same. 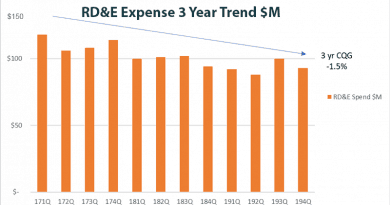 Xerox Financials Are a Telling Sign About Innovation Intentions