Sharp held its dealer meeting the first week of October at the Wynn in Las Vegas, and the meeting, titled “Own It,” was in a sense largely focused around the meeting experience.

It has been two years since Sharp held its last meeting in Phoenix, and a lot has changed both internally and externally for the company. But one thing that held steady was the company’s focus on innovation and new technologies — things that are not printing hardware, even as printing hardware remained a central and critical component of Sharp’s makeup. 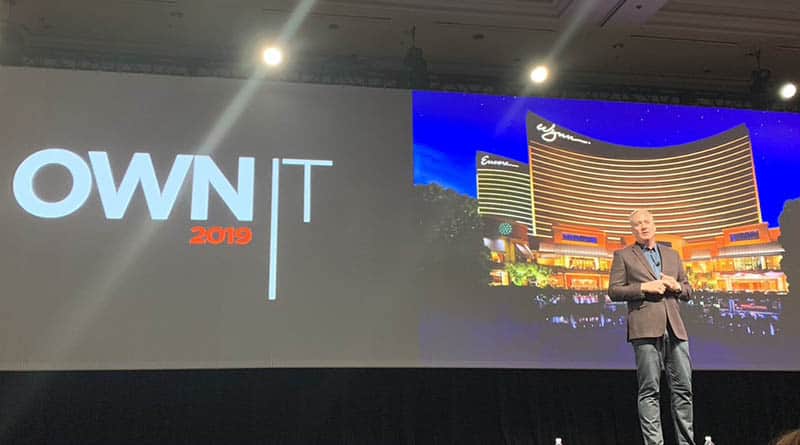 The meeting hosted approximately 950 attendees, including 545 dealers. It was home to keynotes, breakout sessions, and a vendor fair with 134 exhibitors, and at all of them Sharp’s new meeting technology, Synappx, was front and center, so we’ll come back to that. But first, the basics.

It’s been more than three years since Foxconn’s lifesaving $3.5 billion infusion into Sharp, and it would appear to be money well spent. President and CEO Mike Marusic said Sharp has seen 11 straight quarters of profitability after 10 straight quarters of loss, noting that most meetings “slice and dice the data to show something positive,” but in this case “it’s all been positive, no matter how you slice it. … going back 20 years we’ve never had a two-year streak.” Marusic noted that in 2018’s rough conditions the market was down 2% in unit placements; Sharp, meanwhile, saw 12% year over year growth in the document business and “our best market share in over 20 years — the only company to increase market share in three out of the four quarters.” Through June 2019, while the market declined 4.5%, Sharp’s units were up 9%, with color MFP up 6%, mono MFP up 5% and A4 up 66%. Additionally, AQUOS BOARD displays were up 12%, showing, said Marusic, that dealers are embracing new opportunities. “For the first time since we formed direct operations, the dealer channel share … has increased two years in a row,” he said, noting that the dealer channel currently makes up 81% of Sharp’s unit placements.

Foxconn and the “seat at the table”

Marusic and the other Sharp executives presenting, including SVP B2B Channel Sales John Sheehan, VP of Product Management Shane Coffey and VP of Marketing Bob Madaio, discussed some of the events over the last two years that have taken us from the 2017 dealer meeting — the first post-Foxconn — to where we are today. More than three years after the Foxconn deal Sharp seems to be past the honeymoon phase, settled in and reaping both the rewards and criticism that come with being connected to a technology behemoth.

“The new world is moving toward mobility, toward flexible workspaces,” said Marusic. “And more meetings. Way more meetings.” If you don’t think you’re in the collaboration business, he said, think again – about all the connectors you enable for things like Google Docs, Dropbox, Microsoft Teams, and similar apps. People want to have information available to them no matter where they are, but achieving that is not easy, especially when there’s so much emphasis on security. Sharp, he said, is uniquely positioned to provide those capabilities.

Marusic threw down the gauntlet, noting that many companies are talking about the smart office or the future office, but “only one company in the traditional copier group can actually compete across all those lines.” He ticked off the list of what Sharp offers: printers and MFPs, desktop displays, conference room displays, interactive displays, monitors and laptops (in case you’d forgotten – I had, because they were still branded as Toshiba until recently — Sharp Corp. acquired the majority of Toshiba’s PC business last year and recently rebranded them with Sharp’s Dynabook name).

Sharp’s relationships in those areas, said Marusic, are entirely different than those of its competitors because it is a partner – which is much more valuable than simply being a customer on the software and component side. “They communicate with us so we can make partner-level decisions – it is absolutely a valuable resource for someone in our space,” he said, noting again the main differentiator — Foxconn.

Foxconn gives Sharp a “seat at the table” — an idea introduced at the 2017 meeting and reiterated throughout this one. It’s because of that seat that Sharp is, for example, able to work with Microsoft on the Windows Collaboration Display (WCD) — a next-gen 4K Ultra HD 70” interactive display that debuted at InfoConn as part of “the office of the future.” It’s based around Sharp’s AQUOS BOARD displays, combining a built-in microphone, IoT sensor hub and a camera, and is designed to work with Microsoft 365 collaboration tools. It’s a key component of the Synappx system.

Synappx and the smart office

Currently composed of Synappx Meeting and Synappx Go, with Synappx Workspaces to come, the Synappx platform is designed to enable a collaborative, streamlined approach to meetings. Synappx Meeting allows one-click auto-start of meetings, auto-mirroring of a PC and auto-connect of web conference software. Synappx Go uses smartphones and NFC for mobile content display as well as scanning and printing. While Synappx Meeting focuses largely around the displays, Synappx Go also incorporates Sharp’s MFPs — allowing Sharp to merge the old and the new, the hardware and the software, to create this new platform designed to address the challenges of a mobile workforce and “the workforce’s increased expectation of secure accessibility, ease of use and mobility.” And of course, it provides dealers another tool in their arsenals. 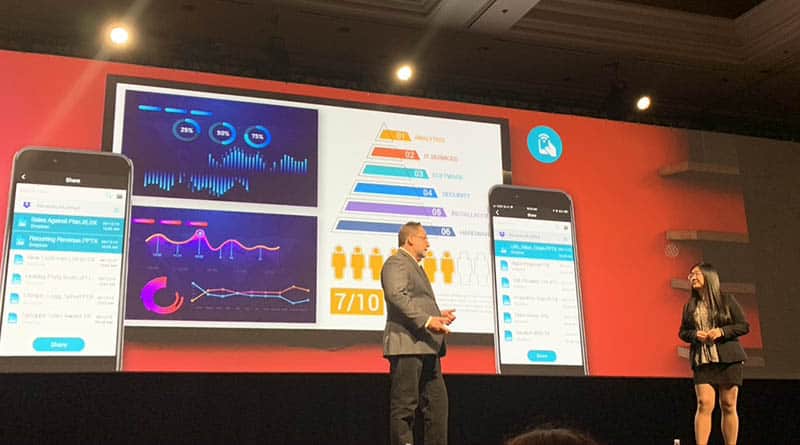 At the 2017 meeting, Sharp shared its multi-phased approach for helping dealers diversify and thrive. Phase three of that approach was the smart office – and Sharp is still aiming at that, although with different tools. Two years ago it showed a product concept of a meeting ‘bot developed by Sharp that was designed to get meetings started more quickly. But, said Coffey, the direct dialog with Microsoft — that seat at the table — allowed them to change direction and put their resources into working with Microsoft and Foxconn on a similar idea.

For Sharp, the ideal situation is to have dealers bundle Synappx with hardware. Marusic is pragmatic; he expects to have about 100 of Sharp’s approximately 400 dealers selling the new products in a year, with between a quarter to a third of revenue under subscription plans. The copiers are the last thing managed by IT, he notes, that is not under subscription.

Oh, right — copiers. There was plenty of hardware at the event, although since there were no new releases during the event it didn’t take precedence (Sharp launched 13 mono MFPs in August, four high-speed color devices in April and a couple of A4 color MFPs in March). It’s not unheard of for an OEM to not launch new hardware around a show, but it is certainly indicative of where Sharp’s focus is — not losing sight of the bread and butter but spotlighting the shiny new opportunities. 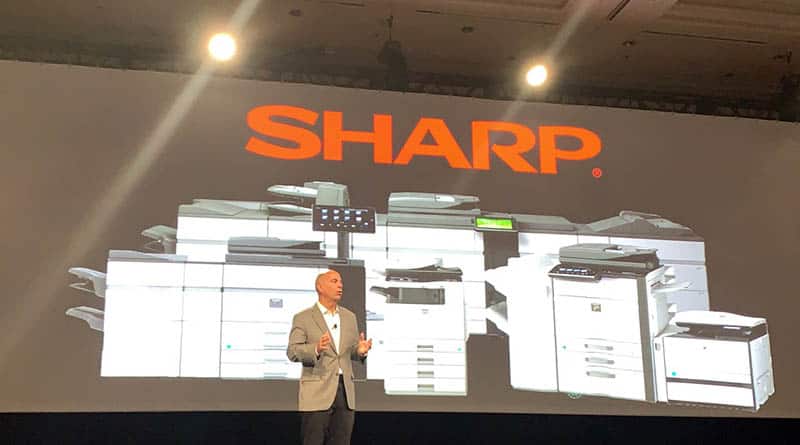 There is a lot of confidence being projected from Sharp right now. They’re riding a strong wave with some pretty cool products and friends in the right places to back them up. But now they have to execute — to sell the Synappx-enabled smart office and to get the dealers on board. Sharp’s leadership is not flying blind – the company holds regular roadshows and meetings with its dealer council where new products are previewed, and a regular topic of discussion has been the need for dealers to adapt their business models to meet the needs of increasingly technologically advanced customers. Sharp has some solid tools to offer those dealers — and a solid plan to back them. They (and all companies in the space) are facing some serious headwinds moving forward. The next couple of years are going to be both interesting and challenging for everyone in the industry, and it’s going to be a case of survival of the fittest. Timing and execution will be critical to staying alive — and of course maintaining a seat at the right table can’t hurt.

Sharp packed a lot into a two-plus day meeting; enough that it’s hard to pack it all into a blog that won’t have you falling asleep by the end (are you still with us?) We’ll come back and focus on a couple more areas, but for now let’s wrap up with some photos of the pieces we didn’t hit:

Finally, because words are inadequate to describe the death-defying-juggling-scythe-thing Mike Marusic participated in, here’s a video.

Sharp Business Systems Named Partner of the Year by Continuum