Downers Grove, Ill. – Cybersecurity specialization and services linked to the Internet of Things lead the next wave of technology offerings from managed services providers (MSPs), according to a new report from CompTIA, the leading trade association for the global information technology (IT) industry.

Two-thirds of MSPs surveyed for the “Trends in Managed Services” report expect to expand their service portfolio over the next year.

Their expansion plans come at a time when market performance has been solid to excellent for the large majority of MSPs (85%) during the last two years. Looking ahead to the next two years, most MSPs expect solid (40%) or excellent (44%) performance to continue.

“Help desk support and network services remain the foundation on which most MSPs have built their success,” said Carolyn April, senior director, industry analysis, for CompTIA.

“But we also see real excitement over new areas that have the potential to help MSPs tap new recurring revenue streams, attract new business and expand engagements with current customers,” she continued. “The successful MSP is likely to feature a combination of bedrock basic services and new, premium offerings.”

While a segment of traditional MSPs has already evolved into security specialists, or managed security services providers (MSSPs), the cybersecurity realm is rich with new opportunities.

“Keeping pace with the sophistication of bad actors attempting to steal data, hack systems and extort ransoms requires advanced skills that many organizations, especially small businesses, do not have,” April explained. “They need help, and an MSP or MSSP that has those skills is sure to be in high demand and at a premium price point.”

The growing need for cybersecurity expertise was identified as the leading driver of positive MSP performance, cited by 52% of firms surveyed.

Managed services related to the Internet of Things, or managed IoT, is another area that’s attracting the interest of MSPs looking to diversify and expand.

Most of the current activity is with large industrial customers, such as utility companies and manufacturing firms, who are using MSPs to manage, monitor and secure IoT devices just as they do with traditional networking equipment.

Other higher-end services that MSPs are adding to their menu include developing tech roadmaps for core areas of IT (identified by 55% of firms), digital transformation consulting (46%), roadmaps for emerging tech (46%) and needs assessments (40%).

“Admittedly premium services can be a tough sell with many customers,” April acknowledged. “But as customers increase their reliance on technology, demand for these high-end offerings is likely to grow.”

A total of 400 technology businesses across the United States were surveyed for the report, which is available at https://www.comptia.org/content/trends-in-managed-services.

It’s Game On in Las Vegas at CompTIA ChannelCon 2019 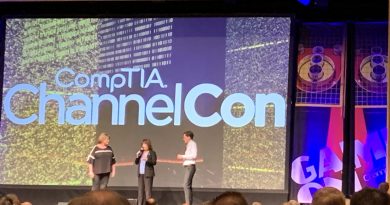 It’s Game On in Las Vegas at CompTIA ChannelCon 2019