Perhaps no other company’s technology sits on or is accessible by more computing devices than Microsoft. Microsoft’s July 22  financial reporting demonstrates the increasingly critical role of cloud computing, with Microsoft 365’s user base more than doubling over the past year and commercial cloud revenue (which includes Office 365, Azure, Dynamics 365 and other commercial cloud services) up 36% year over year. Yet, even as typical office applications moved online, IT departments continued to manage multiple local print servers to fill the printing needs of users. Microsoft’s new Universal Print may change that. It is a subscription-based service that brings organizations a centralized Azure-hosted Universal Print portal that can eliminate on-premise print management infrastructure.

What is Universal Print?

As a new service available to Microsoft 365 subscribers, Universal Print was first announced for private preview in March and is now available for public preview. Universal Print lets IT admins register a printer directly into Azure Active Directory cloud, configure the printer, assign user permissions, and manage the printer from a centralized Universal Print portal. Limited reporting is available to get insights into printer usage. It eliminates the need for print driver installation on individual computers and the requirement for a print server.

With Universal Print, users can discover and use available printers from wherever they may be working. Print jobs are securely sent through the Azure platform to the selected printer. For printers that are not Universal Print-ready, the Universal Print connector is a Windows application that can be installed onto a client PC to connect printers. Major manufacturers such as Brother, Canon, HP, Konica Minolta and Lexmark have already partnered with Microsoft to create new Universal Print ready printers or provide firmware upgrades for existing printers. Software solution providers Kofax, NT-Ware, Papercut, Pharos, Ringdale, and Y Soft have also partnered with Microsoft to provide integration of their solutions with Universal Print.

Targeting (for now) the enterprise market and not the consumer market, Microsoft is rolling out Universal Print over the next few months to the following eligible Microsoft 365 subscriptions:

How will Canon integrate with Universal Print? 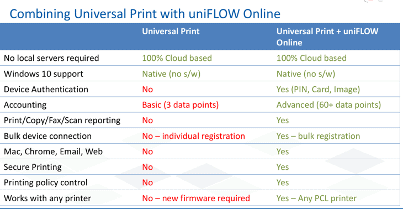 For those organizations using Microsoft 365 Enterprise/Education/Business subscription services, Universal Print will clearly simplify an IT admin’s printer and fleet management duties by eliminating the need to manage local print servers and widely distributed print drivers. After Universal Print has been enabled on the Microsoft 365 tenant an IT admin can – using a single Universal Print portal – register and configure printers as well as assign permissions. The process for adding a Universal Print printer to a user’s Windows device is virtually the same as adding a traditional printer. With a Universal Print-ready printer, the registering, setup, and ongoing management appears to be extremely easy. Although the Universal Print connector will need to be installed on a Windows device to provide a gateway for printers that are not Universal Print ready, the benefits that come from removing the need for print drivers and print servers remain. Universal Print appears to be a good answer to enterprises that are in the midst of getting rid of their on-premise servers (including print servers), want a more centralized approach to print management to better control costs, and want to reduce IT support complexity as it relates to printers.

A few years ago, Canon introduced the Unified Firmware Platform (UFP) for the imageRUNNER ADVANCE models as a way to provide continuous upgradeability of new features and technology as they become available. uniFLOW Online integration with Universal Print combines the two cloud solutions to add functionality and management, making a strong overall solution, especially for the widely distributed work from home workforce.

With the looming end of support of Google Cloud Print, Universal Print should be an immediate consideration as an “alternative print solution” for an organization to migrate their cloud print services. As with any new feature or function, it’s easy to expect Universal Print will become a standard (and free) feature service of the Microsoft 365 offering, ultimately for both commercial and consumer customers. We are excited to see what the Universal Print future will bring.

September 25, 2020
Do NOT follow this link or you will be banned from the site!
We use cookies to ensure that we give you the best experience on our website. If you continue to use this site we will assume that you are happy with it.Ok