Kyocera just pulled off a full-on national dealer conference. The last one I attended was Epson’s in early March 2020, right as COVID was about to change the entire landscape. By all accounts, Kyocera was up to the task, providing their dealers with a cogent view of their strategy, real-time status and vision of the future.

Of course, Kyocera has had plenty of time to plan, since this very event has been twice postponed. They used the time well. The event started with a 4 p.m. general session that included presentations from most of the U.S. executive team and kicked off by HQ Japanese executive Hironori Ando, president of Kyocera Document Solutions. Next up was Oscar Sanchez, president & CEO of Kyocera Document Solutions America, who not only shared a very personal and riveting origin story with the entire room, but also made a point of setting the tone for the entire meeting, which centered around frank and down-to-earth discussion. It was a message that clearly resonated. 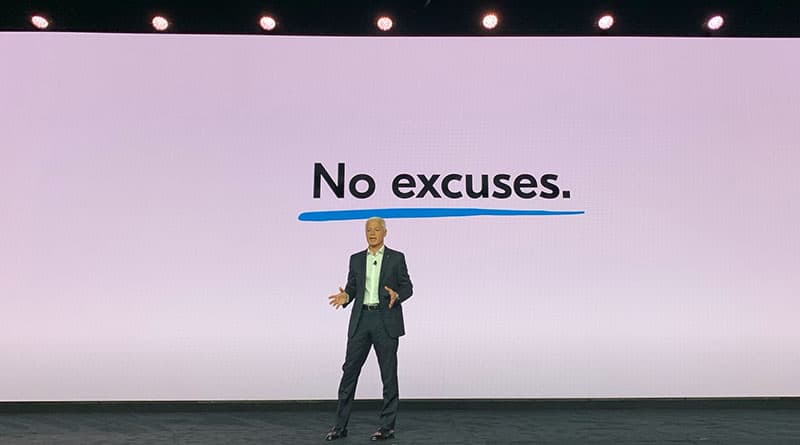 This pretty much says it all

Sanchez outlined an eight-point strategy that began with the goal of being the easiest company to do business with. For Kyocera, that means a focus on efficiency and being data-centric. The strategic direction also includes providing the most complete hardware portfolio, growing a unique production inkjet line, streamlining the Kyocera software products into core groups including Capture, Manage and Output, leveraging Databank expertise for professional services, creating a white-label managed IT services offering for independent dealers, support for dealers wanting to create e-commerce capabilities, and developing a flat rate subscription services model. The last three items are specifically designed to offer their dealers additional opportunities for recurring revenue streams as we witness both a secular decline in print, bundled with a pandemic-induced decline. 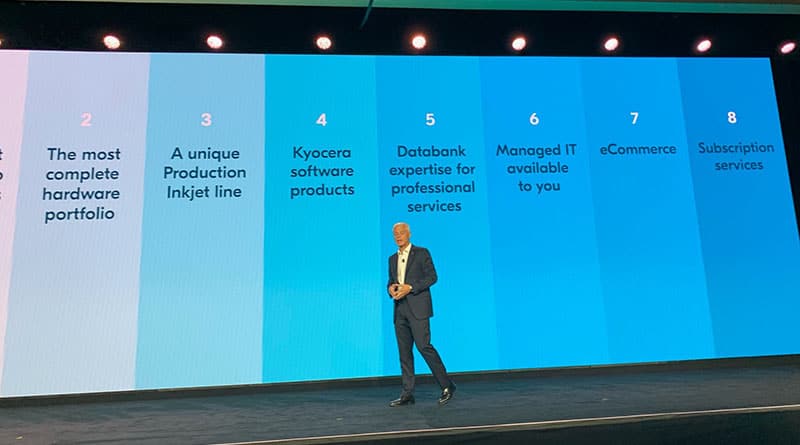 Perhaps not surprising, but not the norm, and definitely a sign of the times was the inclusion of Frank Zupa, vice president of Customer Operations, who had his own presentation slot at the general session. Zupa highlighted Kyocera’s efforts to mitigate the universal supply chain issues the imaging channel and every other channel is experiencing. 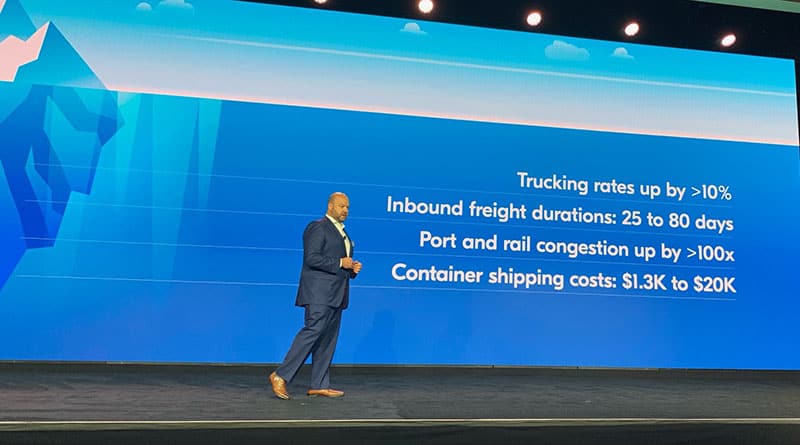 By the end of the two-and-a-half-hour opening session, energy and attention were waning, but Kyocera had the perfect “fix” — Magic! Yes, THE Magic – Earvin “Magic” Johnson. He is a 6-foot 9-inch wonderful bundle of warmth, inspiration and encouragement. I was right there up front, but it didn’t matter because he made it all the way to the back of the room, making an effort to include the whole audience. It could not have been a better ending to the opening event. 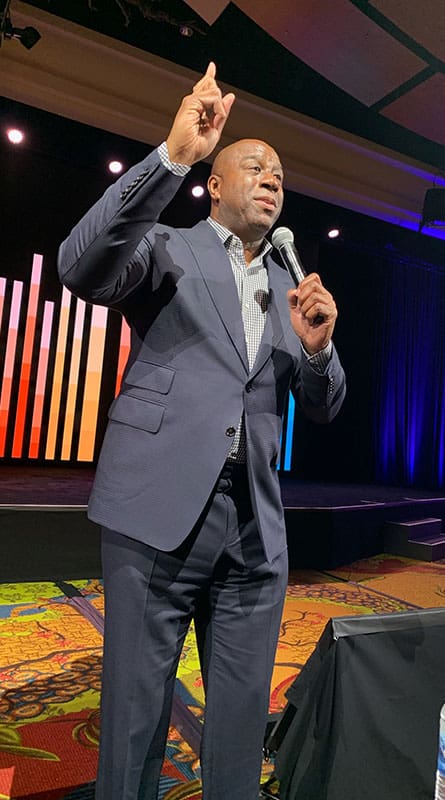 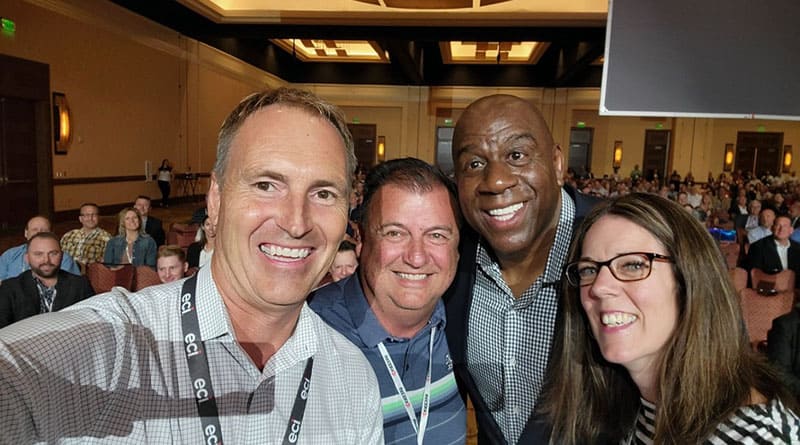 Check out the ECI Solutions’ team selfie with Magic!

Day two opened with a panel discussion with the Kyocera America executive team and an open forum live Q&A that a surprising number of dealers took advantage of. An open mic can be a dangerous thing in our channel, but the executive team handled the broad range of questions with aplomb. 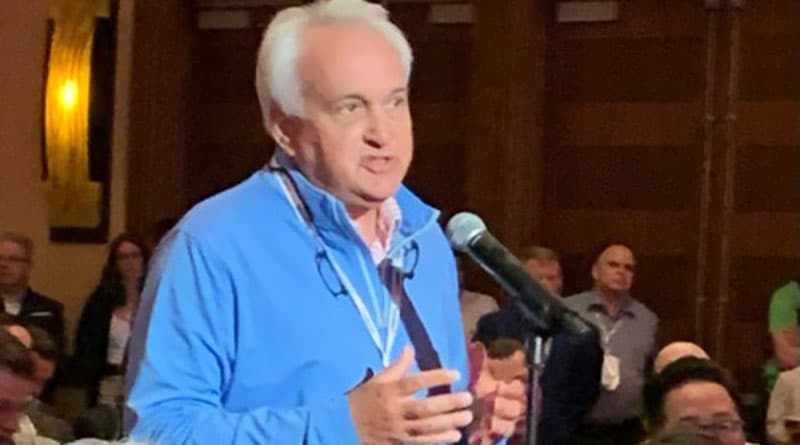 The rest of the day consisted of breakout sessions on everything from setting up an e-commerce solution to tips on attracting and retaining sales talent to an interesting discussion on subscription services led by Zuora, which offers a recurring billing solution.

The final event evening was a visit to Knibbe Ranch, a working beef cattle ranch founded all the way back in 1852. The western setting, great food, live band, rodeo and plenty of libations made for an excellent night.

This was a well-organized dealer conference with clear messaging. The feedback from dealers on site was overwhelmingly positive. The executives were accessible and frank in responding to issues. In some ways, I feel like we are getting back to the basics in an ever more complex environment. However, the challenges out in the market right now are immense and the burden of reinvention rests solidly with the independent dealer. Not all boats are going to rise with this new tide and we can see the impact not only in the level of M&A activity happening but also in the level gearing up on the horizon. It is no coincidence that Dan Doyle Sr. and Jr. from Dex Imaging were at the meeting, as well as John Barbieri and Jim Morrissey of UBEO, Chip Crunk of RJ Young, Frank Cucco of Impact Networking, and Michael Brigner and Michael Cozzens from Visual Edge – all dealerships actively acquiring other dealerships.

There are no easy answers, so instead of trying to come up with something profound to guide you, I leave you with the optimism of a sunrise in the Hill Country of San Antonio. 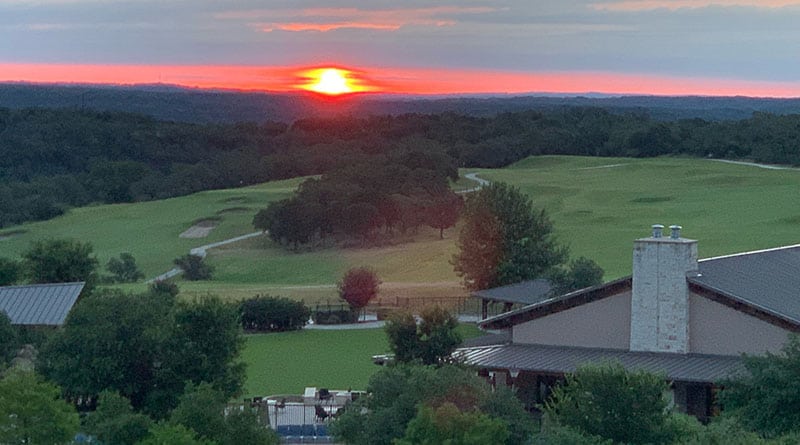