HP’s ReInvent Conference earlier this year showcased some of the brightest minds in the business world today and brought them together to show how they are innovating in their industries. HP’s Enrique Lores hosted a session with guest Nina Garcia, editor in chief at Elle magazine, in which the two discussed publishing, fashion, and most of all their common ground: printing.

In her years as editor in chief of Elle, Garcia has sought innovation and opportunity to ensure that Elle remains the leading fashion magazine in the world. One huge step she took personally was taking a role as a judge on the popular reality show Project Runway. When the show debuted it was a huge risk, as it exposed the secrets of the fashion industry that designers had kept in the dark for so long. Garcia saw this risk, but she also saw it as an opportunity to take the fashion industry and Elle’s name and put it in the consumer’s living room with a weekly reality show. Garcia told Lores that the invitation to be a judge was a scary one — one that could have cost her her job if it went poorly — but it was a risk she took, and one that paid off in the long run, as both Project Runway and Elle are still household names with major footholds in the fashion industry.

Taking the momentum from Project Runway’s success into her role as editor in chief for Elle was not a hard transition as Garcia decided to innovate with printing — creating personalized covers for subscribers. Using Kim Kardashian and Jennifer Aniston, both celebrities with huge followings, as the cover models for these personalized collectible editions of Elle, Garcia shifted the momentum flawlessly and gave the consumer something special, with a custom message from a favorite celebrity.

Elle’s personalized covers would not have been possible without HP’s data-collecting technology. In Garcia’s first meeting with Lores, she learned about this technology and knew she had to use it. The custom covers with personalized messages are truly collectibles, and Garcia spoke about the power of print to create something special — in our current digital age, having a tangible, printed object that cannot be altered or edited or deleted is unique, and that is what makes printing so powerful. For Garcia, the power of print is seen in her publications. Lores also believes in the power of print, and used this opportunity to show how HP was going to utilize that power in a new technology. 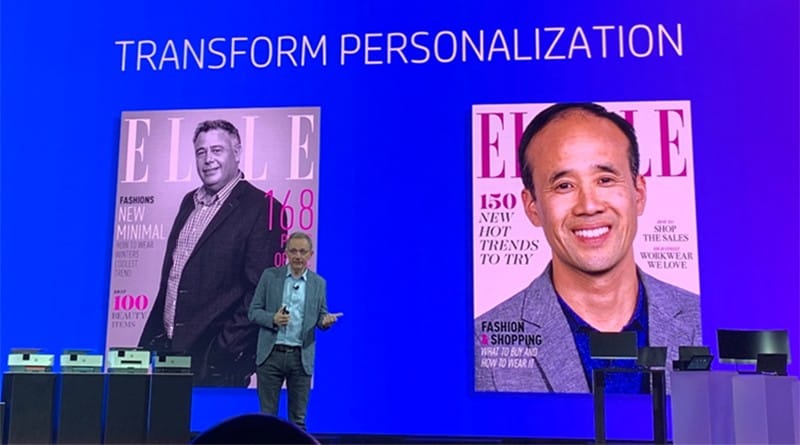 Garcia noted that the fashion industry is the second-largest polluter in the world, and improvements in technology are invaluable to making its global impact more positive. HP’s color matching is one step in the right direction to helping the fashion industry achieve that. Using a pocket square and a scarf, Lores showed Garcia and the audience how they matched completely in color, revealing they had both been printed on a new HP printer that will seek to alleviate the color matching strain of the textile industry — one of the reasons their carbon footprint is so large. HP’s color matching technology is state of the art and is just one step that HP is taking to break the stigma that all printed products are bad for the environment.

Lores also spoke about other steps HP is taking to ensure that the printing industry is not negatively affecting the planet in the way many perceive it to be — paper does kill trees after all, right? HP would like to change that way of thinking — they take their environmental impact very seriously, and are constantly developing new technologies and relationships that will make a positive global impact. Some examples of HP’s attempt to break the stigma of printing include planting entire forests for the purpose of making paper, using plastic found in the oceans to make traffic lights and printers, using fully recycled plastic to make toner and ink cartridges, and the aforementioned new color matching technology that will eliminate some of the negative impact in the textile industry.

Garcia and Lores both agree that printing is important to the world — it is their business and both of them are passionate about making that business environmentally friendly. Through technology developed by HP, businesses like Elle are able to adjust their impact from potentially harmful to sustainable, and through this new technology and their positive environmental impact, HP is working to break the negative stigmas surrounding the printing industry.