In April, Sharp’s dealer roadshow made its final stop in the Windy City. In addition to having the opportunity to hear executives detail Sharp’s plans for the future and introduce products, there were also a few excellent panel sessions.

A session that stood out for me was a discussion on Sharp’s dealer council with Mark Miller, President and CEO of the Nebraska-based Eakes Office Solutions who was joined by Sharp’s Chris Johnson, Director of Sales in the Central Region and moderated by John Sheehan, VP of Channel Sales. With the council, we met

Just like the Jedi Order, the Sharp dealer community has its own “High Council.” But unlike the Jedi, Sharp’s dealer council members discuss the problems and opportunities that dealers face in the marketplace.

The council meets twice a year, and Sharp’s entire senior executive leadership team is present for every minute of every meeting, according to Miller, who moonlights as the council’s president. “We do listen to the dealer council. It’s not just for show. It can get pretty combative at times and very real at times,” said Sheehan.

In fact, Miller said that there is “a lot going on” at council meetings. Dealers are talking about a lot more than just the MFP. Council members — and dealers all over the country, really — are discussing opportunities in the software and professional services and network services areas, as well as Sharp’s new collaborations with Microsoft and Amazon and Cisco and ventures with RocketStart. All three panelists said that dealers are talking about problems with adapting their business models and offerings to a rapidly evolving technology universe, intense competition and constant acquisitions in the marketplace, and complications with pricing are common discussion topics at meetings.

Acquisitions, in particular, are having an enormous impact on the dealer community, according to the panel. “Dealers have been eating each other up,” said Johnson, noting the 70 or so acquisitions that took place this past year.

You can’t blame buyers. In a hyper-commoditized, super-competitive marketplace, growing market share and leveraging economies of scale are increasingly attractive growth strategies. And because of Sharp’s geographical footprint, buyers are running out of markets to buy into, one natural side-effect of a healthy appetite for market share. Miller noted that with each acquisition, “we’re seeing the lesser competition go away.”

With all these acquisitions and pricing pressure, you’ve got to feel for the smaller dealerships. It’s hard enough dealing with slimmer margins and shrinking demand for their core products. But smaller dealers also have to deal with larger competitors who can do a lot more than selling and servicing copiers and MFPs. “Nobody needs to have a piece of paper — it’s not that important. It’s the information that’s on the paper that’s important,” said Johnson.

Another problem often discussed is, what do you do when everyone has more or less the same core products? Indeed, there is some differentiation and competitive advantages in the copier and MFP marketplace. But let’s face it, your box does pretty much the same thing as your competitors.’ Miller said that Sharp is there to back up his business, and provide them with that little extra to edge out the competition. He said between all the support and amenities that Sharp can provide, coupled with a robust product map and competitive pricing, it goes a long way in helping them win more business.

Looking to the future

One of Chris Johnson’s goals for the future is to help smaller dealers branch out into the same avenues as their larger competitors. “One area that is a natural start is with displays,” he said. His team is in the process of achieving their education system for dealers. He stressed that dealers should take advantage of the resources and relationships that Sharp can provide. “It should be a top priority,” he said.

Sharp also plans to get more experts involved at the account level with their dealers. This comes on the heels of an analysis of the opportunities they’ve been involved in. According to Sheehan, Sharp is winning over 45 percent of deals that they are engaged in. They have also increased their focus on training, hiring dedicated staff to run an ongoing training program. Miller said that training has been a challenge, especially for those that were solely focused on copiers.

Partners aren’t stuck screaming into the abyss. Sharp isn’t just supporting their partners, they’re listening to them and they are learning. 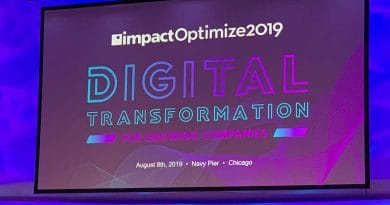 Sharp Owns Its Seat at the Table