One of the things we’ve missed this year – one of many — is in-person dealer events and analyst briefings. I’m sure I’m preaching to the choir here – we all enjoyed the big gatherings in Las Vegas or Orlando or some other more unique locations, where we’d all get together, hang out with people we don’t get to see that often, and learn about what’s new and what’s planned with the OEMs. Whether a full dealer meeting with a hosted analyst dinner or reception as part of it, or an event solely for the industry press and analysts, they are always great, and they are missed.

Everyone, of course, is making the best of things virtually, and I tip my hat to all of you – having been on the planning end of enough live events in my life, I can only imagine how tough it is to try to accomplish things in an online format. Brother was the latest to hold a virtual analyst briefing to discuss its B2B business, the last year and what the future holds.

Brother’s Senior Director of B2B Marketing Dan Waldinger kicked things off following a toast that helped us all pretend we were at a fancy venue (I won’t say who was or wasn’t actually drinking during the call). Waldinger provided a FY 2019 update – Brother Global released its results for the first quarter of its 2020 fiscal year, which ended March 31, in early August, and of course those results had begun to show negative impacts of the COVID crisis. However, Waldinger talked about 2019, so we’ll focus on that.

He noted the hardware category was up nearly 9%, and color laser, in particular, was performing well, with multifunction color devices up 17% and single function up 7% – “we’re definitely seeing what many of you have been talking about – the shift from mono to color,” noted Waldinger, although mono devices and business scanners were also up. Waldinger discussed Brother’s focus on its value print program (VPP), which was a hot topic at last year’s event, and has the company shifting from transactional to contractual business. Brother increased its machines in field (MIF) under contract 33%, with more than 125,000 units. Also building from last year was an increased focus on the systems integrator (SI)/VAR channel, which was up 12%, and overall Waldinger noted an increase of 13% in its B2B non-retail channel business, which includes all hardware and supplies.

The first part of the presentation was wrapped up with a testimonial video from partner CDW, which launched what they call the “printer supply program” with Brother’s VPP as part of it, and has been very successful with the whole package.

But of course, it’s impossible to talk business these days and stay focused on the past (as much as we all might like to). What has Brother been doing in response to COVID-19? Like everyone, they have had to pivot a bit and shift focus to help themselves and their partners. “There were businesses that were shutting down across the country,” said Waldinger. “We’re very cognizant and concerned about helping our dealers so we immediately looked at some of the industries that would still be functioning – what was deemed at the time to be essential. We proceeded to immediately create a lot of sales materials that our dealers could use to help sell products to those environments.”

Work from home was obviously a big push as well – in fact, one area of growth for Brother in the first quarter of FY20 was SOHO products — so Brother developed a “work from home” hub on its website to give tips and tricks on how to get home workers up to speed quickly.

There was a lot of focus on the “six-foot office” – the office space that allows for six feet of distancing between employees. It’s a tricky concept, and its sustainability remains to be seen. Brother calls it a “balanced deployment approach” – a shift from A3 to A4 with fewer users per device, and printer pods that are closer to the workforce. Employees are going to feel more comfortable with fewer people touching a device, and so a device-to-employee ratio becomes an important conversation to have with customers, noted Waldinger. Contactless printing also comes into play here – whether using badges to authenticate and release jobs or initiate document workflows, the less touch the better.

The Toshiba relationship, which was also big news last year, still has a role in the post-COVID workplace. “We really wanted to talk about the shift to work from home, but it’s the business work from home, not necessarily the consumer,” said Waldinger. “Toshiba had come up with this idea that, it’s not a home office, it’s a corporate office in your home.” Brother worked with Toshiba to prepare a kit that showed the applications that are important to have at home from a staff perspective – items that include a number of Brother’s L5000 workgroup devices. 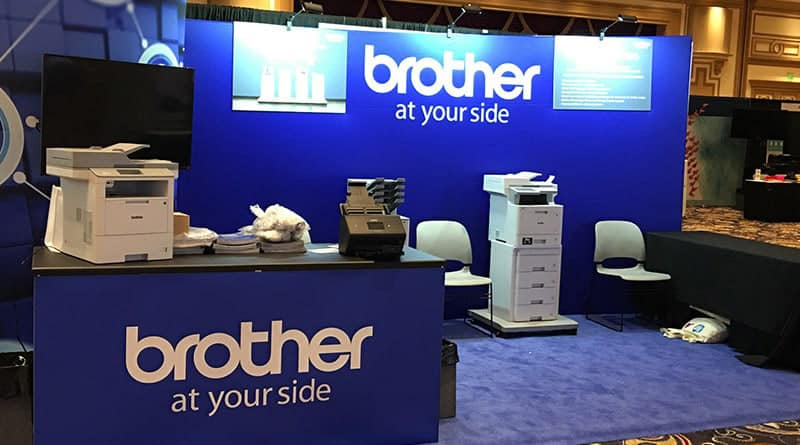 Brother having a booth at Toshiba’s 2018 LEAD event was big news. (Also, virtual events don’t really have a lot of photo ops, so we dug into the archives for an image).

Solutions were another big talking point for Brother at last year’s event, and Waldinger emphasized an increased focus in that area over the last year, noting how much their solutions capability had developed over the last 12 months. The Brother website has a portfolio of more than 120 partner solutions designed to show what products and solutions work with what hardware.

One major solution added to the portfolio was Kofax – Brother announced a partnership in March in which the Kofax ControlSuite print management, capture, and security solution would come embedded on several Brother devices. Kofax PaperPort document management software already came in the box of every Brother printer, so the partnership was an extension of an existing relationship.

Brother was also one of the first OEMs to announce an integration with Microsoft’s Universal Print. We’ve covered Universal Print extensively – you can read more about it here — and it will certainly be an important component for Brother as print servers shift from on-prem to cloud. Universal Print is currently in public testing and Brother devices can be used with the Universal Print connector. Starting in January 2021, Brother plans to have devices that will work natively with Universal Print.

The Brother Knowledge Center is a big part of getting these solutions out to dealers – with nearly 4,000 registered users, 15,000 hours of product training delivered and 22,000 resources downloaded, it’s key to Brother’s relationship with the channel,  as is its dealer council, which helps Brother get feedback, shape its messages, and ensure it maintains a customer-centric approach.

Look – I probably should have led with this, but I hereby encourage you to take a drink every time I use the term “new normal” or “pivot” – not just here but in every piece I write. I’ve grown to hate these terms, but at the same time, it’s impossible to talk about business in 2020 without them. Brother is doing its best to adapt to the new normal and make the best of the situation, and it’s about as well-equipped to do so as anyone with its stable of A4 and SOHO devices.

Although the SOHO label has been a bit of a burden in the past as Brother has attempted to carve out its place in the business space, it may turn out to be a good thing for the company. Gerry Crean of XSE Group gave a testimonial toward the end of the event, and noted specifically that “what was really unique about Brother was the dedication to that sub-$1,000 device, and [with the COVID situation] if there’s a silver lining, it’s being with Brother because you have a desire now by both the SOHO user and the corporate user to basically take care of all those people at home and provide devices for them … Brother offers us something unique to put in place with many of those people.”

By pivoting quickly to its balanced deployment approach, Brother is demonstrating its understanding of current needs as well as its agility. Meanwhile, continuing to provide solutions like Kofax and Microsoft Universal Print helps future-proof its printing solutions, allowing it to adapt to whatever new-new normal the future may bring.

The next few quarters are going to be rocky ones, to say the least. We look forward to hearing how Brother weathers the storm – hopefully from a nice hotel boardroom.