In this magazine, we talk a lot about managed print services, but MPS is just the thin edge of the services wedge. Printer and copier manufacturers offer a host of other services, and that list continues to grow as companies invest and acquire more assets.

There have already been a number of big-ticket deals inked over the past few years that have allowed manufacturers to generate more service revenue. The Xerox and Global Imaging Systems deal, Konica Minolta’s acquisition of Danka Office Imaging, and Ricoh’s marriage to IKON Office Solutions are all examples. The urge to merge has continued with Canon snatching up Océ and its Imagistics organization last year. While the respective OEMs did gain some service revenue, these deals were done principally to get more direct access to channel. Now that many of the channel opportunities are gone, we will see more deals that are purely services plays.

The year started with just such an acquisition when, in January, Konica Minolta purchased the managed IT service provider All Covered for an undisclosed amount. With a client base made up of small- to medium-sized businesses, the deal was a smart move. It allows Konica Minolta to reap a new revenue stream and access the fragmented SMB market—a market that has proved difficult for most printer and copier companies to effectively penetrate.

Offering a range of IT services including network support and cloud-computing solutions from 22 offices across the U.S., All Covered has a pretty large footprint. And the company has been growing over the past few years. Konica Minolta has indicated that it wants that growth to continue. Unlike the Danka acquisition, All Covered will be run as an independent business.

The All Covered deal isn’t unique to the industry. It is only the latest in a string of deals that indicate printer and copier manufacturers want to be service providers as well as hardware vendors. It is tough to make a profit with hardware, as machines have become largely commoditized and margins are razor thin. To compensate, hardware vendors have relied on consumable sales for profit. Revenue from consumables, however, is at risk. Companies are printing less and many are looking for inexpensive, third-party supplies. With beefy margins, recurring revenue, and contracts that can lock competitors out, services are becoming the new path to profitably for many hardware manufacturers.

The HP Way to Services

Offering a broad portfolio ranging from computers, servers, and networking equipment to printers and MFPs, Hewlett-Packard is not new to IT services. In 2008, HP grew its IT services business significantly through the $13.9 billion acquisition of Electronic Data Services. More recently, the firm paid $2.35 billion for the data-storage firm 3Par, which allows HP to support private cloud computing environments with hardware and market host-based cloud services.

While HP has been signing 10- and 11-digit deals to acquire IT services firms, its Imaging and Printing Group has also been busy expanding its portfolio of services. The first major deal that IPG signed to acquire a service provider was back in 2005 when it paid an undisclosed amount for Snapfish. Acquiring the online photo-finishing service provider represented a sea change for IPG. For years, it had promoted home printing as the best and most cost effective way to generate digital photos—service was rarely mentioned. But as a growing number of digital pictures were processed online and fewer were being printed, Snapfish allowed IPG to retain some of the revenue it would inevitably lose as consumers abandoned their inkjets in favor of the Internet.

Shortly after buying Snapfish, IPG began looking for other ways to grow its service offerings so it could maintain its place as a market leader in the office. At an analyst meeting in October 2006, executive vice president Vyomesh Joshi, the head of IPG, articulated the need to do more than just sell hardware. He told attendees that HP had to offer customers choices as to how they could obtain and utilize hardware. The head of IPG’s worldwide enterprise sales, Bruce Dahlgren, outlined a new sales structure for the company and explained how HP would seek to provide services and expertise as well as hardware.

At events held in New York City in the summer of 2007, IPG made it clear it was putting services front and center. Prior to these events, dubbed Print 2.0, analysts had been treated to IPG’s “Big Bang” soirees, where they had the opportunity to interact with lots of new hardware. At Print 2.0, however, it was all about services and applications—many analysts left the event wondering where all the printers were.

Today, IPG offers services to businesses of every size in a wide range of vertical markets. After Snapfish, IPG acquired Logoworks, an online service company that develops corporate graphics. IPG also launched MagCloud, an on-demand magazine publishing and printing service. In addition to the online services, IPG continues to broaden its selection of managed print services and is now recognized by market research firms like Gartner and IDC as being a leader in the MPS space.

Services Not New at Xerox

While firms like HP and Konica Minolta are quickly adding services, Xerox is a veteran that has been in the services game for decades. Consider the following quote from an ancient issue of Fast Company magazine: “XBS (Xerox Business Services) is the world leader in document outsourcing; it has more than 4,000 customers in 36 countries—customers like Intel, Microsoft, General Electric, Motorola, Lufthansa, and Texas Instruments—and it provides services to as many as 4 million businesspeople per day.” That was written in 1996! Since then, Xerox has continued to innovate in the services space. Today, it offers a host of document services along with its production and office hardware.

Xerox has been a pioneer in the MPS market. In 2004, it launched its PagePak program in Europe and rolled it out in North America in 2007. The program was one of the first MPS initiatives for resellers. It allowed Xerox’s value-added reseller channel to place certain workgroup Phaser and WorkCentre devices on a cost-per-page contract. It provided a software component so Xerox could support its resellers when customers ordered services and supplies.

Although Xerox has always offered a range of services to its customers and channel partners, it grew its offerings dramatically when it acquired Affiliated Computer Services. In a stock and cash transaction totaling $6.4 billion, Xerox took over what it called the world’s “largest business process outsourcing (BPO) firm.” ACS provides thousands of companies and governmental agencies worldwide with support in areas such as finance, human resources, information technology, transaction processing, and customer care. The goal of the merger was to accelerate Xerox’s growth in document services and BPO management.

At the time of the acquisition, Xerox CEO Ursula Burns said the revenue generated by Xerox’s service business would roughly triple from $3.5 billion in 2008 to over $10 billion in 2010. The impact of the of the deal can been seen in Xerox’s most recent financial statements. In the last quarter of 2010, revenue from services, outsourcing, and rentals jumped to about $3.75 billion from $2.05 billion during the same period in 2010. 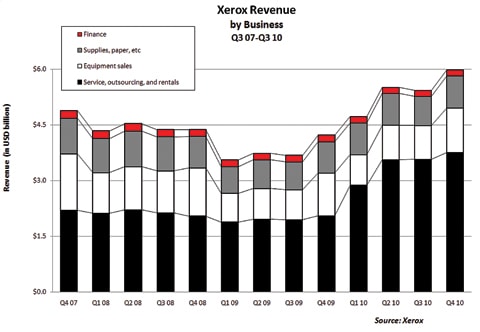 The success that companies like HP, Konica Minolta, and Xerox are having as they grow their respective service offerings is not going unnoticed. Now that the larger channel assets have been gobbled up, firms marketing high-margin services will become the next logical targets for acquisition. In fact, that trend has already begun.